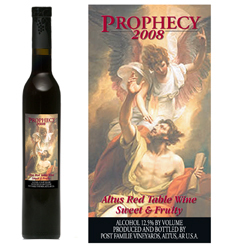 Post Familie Prophecy -- IN STORE PICKUP ONLY -- NO SHIPPING

ALTUS, ARK. -- One seed, one vine, half a row, and almost 15 years later, Post No. 194 looks to be a winning combination for a new grape cultivar that can weather a late freeze and fulfill a prophecy from 1909.

Named Post No. 194 in the Post Familie Vineyards experimental breeding program, this new grape is a hybrid of the European Cabernet Sauvignon and the American Munson grape.

The Munson was developed by Hermann Jaeger of Neosho, Mo. by marrying his No. 43 Post-Oak grape with a seedling of his Ruperstris No. 60. Originally known as Jaeger No. 70, Hermann Jaeger renamed it for the much-honored grape horticulturist Thomas Munson.

In a 1909 book titled "Foundations of American Grape Culture," the horticulturist wrote, "When well pollinated, (the Munson) bears immense crops, and is a fine red wine grape. I mention it, so as to show the prime origin of this vigorous, hardy, healthy family that promises to play an important part in American viticulture."

The Munson has been grown in the Post Familie vineyards for well over a century. In 1994, John Grinstead, a grape breeder from Missouri and big proponent of Munson wine, visited Post Familie Vineyards. "He wanted to come down and see our Munson and he wanted to advise me that a cross needs to be made with Munson and other native and noble varieties," Thomas Post explained.

Encouraged to experiment with breeding the grape based on the "prophecy" of Munson, Thomas Post with his father Mathew began crossing the Munson with native and noble varieties such as Cynthiana, Ives and Cabernet. Post and his wife Audrey House, also a winemaker and owner of Chateau Aux Arc winery, tried two years later to cross it with Primitivo, Zinfandel and Syrah.

"In 1995 we did the cross work, the grape sex," Post said. To breed a new varietal, a white sack is placed over a bunch on a selected vine before it opens to prevent it from being bred with anything else. "So when the other bunches on the vine are blooming then you take that off and you introduce the pollen you want on the bunch, close it back up, staple it up, record what you did on the bag and now you've made a genetic cross," explained Post.

"Grapes have 21 chromosomes, and it takes about 500 seeds to make the complete expression of a cross," Post said. "So you can cross two red grapes and come out with a white grape somewhere down in there. This is all quite possible."

About 700 seeds were produced in the experiment. "We planted those and, of course, some of them grew up and some of them died from natural maladies." In the first year, the seed grew into a plant that was about one to two feet tall. Post planted the seedlings from that lot in a nursery row for one more year. The next step was to plant those nursery plants 18 inches apart in a commercial vineyard setting.

"About the sixth year we had fruit on all of them and we were able to taste the fruit to see which ones had a desirable flavor for winemaking," Post said. Out of that series, 14 were selected and a half row of each was planted.

"I grew those another four years to get them up and producing well, and I made wine out of each of the fourteen," Post explained. "We saw that the wine on about five of the varieties was really pretty choice. So we started working with those."

The Post No. 194 made such a good wine in Post's opinion that he decided to propagate it. "See, this all started from one vine, one seed. Then we expanded to half a row. Then it takes five years to get it up to a mature vine that will produce a wine that's going to be stable and be produced again and again." Now there is an acre of No. 194 planted in the Post vineyards, which is enough to make a legitimate batch of wine, he added.

"Last year it was harvested a little bit early and it had a little bit high total acid so that balances better with sweetness," Post explained. "We added sugar to it so it's a sweet, fruity wine we made last year. In the future it may not be quite so sweet. We can make it drier if we let it ripen a little longer. It turns out that it has a nice window of ripening that stays in the pH range that you need for about 10 days." Many grapes go through the desired pH range in about three to five days.

In addition to taste, the positive appeal of the No. 194 is that it is late to bud and vigorous in growth. "Budding late is good for avoiding frost," Post explained. "This won't get hurt from the ice." It also self pollinates. When making plant selections throughout the process, Post only selected those that were "self fertile brides." He added that the No. 194 looks like it will be able to mechanical harvest beautifully.

All of these attributes point back to the prophecy by Munson that this hardy, healthy American Munson variety may, in fact, play an important part in American viticulture. Thus, the wine from experiment No. 194 has been named Prophecy. The art on the wine bottle label is of a prophet. The artwork is titled "Isaiah's Lips Anointed with Fire," painted by Benjamin West in 1782.

"I think this is going to be one of those varieties that we will enjoy," Post said. "Its wine will be a much more joyous thing to have."

A limited supply of Prophecy went on the market this year and is selling very well. Post plans to apply this fall for a patent for this red hybrid varietal. Post cannot sell a No. 194 plant and still patent the new grape. However, the wine can be sold before the patent is in place because it is a byproduct of the plant.

Post added that there are another four or five hybrids from this breeding experiment that look promising but he has yet to give them the focus he has given Prophecy. His dad likes the No. 13. Post explained that any time a seedling comes from open pollination there is about a one in 10,000 chance of success. In controlled breeding the chance of success is about three in 1,000. "So if we were to have three or four varieties come out of here, wow. I'm tickled to have that much success," Post said, adding. "There's probably another five years to see."