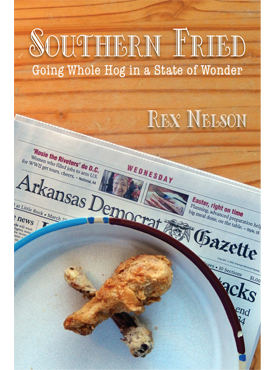 Southern Fried: Going Whole Hog in a State of Wonder

For decades, Rex Nelson has been traveling Arkansas. He learned to love the back roads, small towns, and people of the state while going on trips with his father, who sold athletic supplies to high schools. They sat in old Depression-era gyms built by the Works Progress Administration, ate in small-town cafes, and waded in streams on warm spring days.

Throughout his career as a sportswriter, political writer, senior staff member in the governor’s office, presidential appointee to the Delta Regional Authority, and now corporate communications director for Simmons Bank, Nelson has written millions of words about Arkansas and its people.

In this collection of columns from the Arkansas Democrat-Gazette, Nelson brings to life the personalities, communities, festivals, and tourist attractions that make Arkansas unique. As he says, “Arkansas is a hard place to explain to outsiders. We’re mostly Southern but also a bit Midwestern and a tad Southwestern. The Ozarks are different from the pine woods of the Gulf Coastal Plain, and the Delta is different from the Ouachitas. Invariably, though, those who take the time to get off the main roads and get to know the real Arkansas are entranced by the place.”