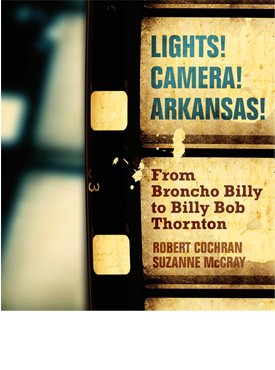 Lights! Camera! Arkansas! traces the roles played by Arkansans in the first century of Hollywood’s film industry, from the first cowboy star, Broncho Billy Anderson, to Mary Steenburgen, Billy Bob Thornton, and many others. The Arkansas landscape also plays a starring role: North Little Rock’s cameo in Gone with the Wind, Crittenden County as a setting for Hallelujah (1929), and various locations in the state’s southeastern quadrant in 2012’s Mud are all given fascinating exploration.

Robert Cochran and Suzanne McCray screened close to two hundred films—from laughable box-office bombs to laudable examples of filmmaking -- in their research for this book. They’ve enhanced their spirited chronological narrative with an appendix on documentary films, a ratings section, and illustrations chosen by Jo Ellen Maack of the Old State House Museum, where Lights! Camera! Arkansas! debuted as an exhibit curated by the authors in 2013. The result is a book sure to entertain and inform those interested in Arkansas and the movies for years to come.